One of the least understood families in the Bible is Jesus’ family. A scarcity of biblical information accounts for some of our ignorance. On top of that, we are prone to either canonize or demonize every character mentioned in the Bible. In the case of Mary, Jesus’ mother, our tendency to exalt a human beyond what is biblical is most apparent. Yet, the story of the wedding at Cana depicts a mother’s simple faith that is within the reach of any Christian mom. However, we need to avoid some false assumptions.

First of all, we should not assume Mary asked Jesus to miraculously provide wine. She asked for Jesus’ help with the shortage of wine. Yet, the passage makes it clear that Jesus had not performed any miracles prior to this occasion (John 2:11). The folks in the kitchen were desperate, and Mary asked her son (who had some disciples with him) to help in some way — maybe a trip to the wine merchant. Jesus was her eldest son, and Mary may have been widowed. She was accustomed to relying on him, and he was accustomed to caring for her. Nevertheless, her request set the stage for a conflict.

That conflict reveals another assumption we must avoid, namely that Jesus’ reply to his mother must correspond with what we think is appropriate. When Mary told Jesus, “They have no wine” (John 2:3), Jesus’ reply seems rather harsh: “Woman, what does this have to do with me?” (John 2:4). My mom is ninety-eight, yet if I spoke that way to her, I think she would still grab a bar of soap to wash out my mouth.

In the first place, he called her “woman.” There is likely no place on earth where that is considered a term of endearment for ones mother. Certainly in Jesus’ day it was not. The phrase, “what does this have to do with me?” could be translated as more personal. When it is used elsewhere, it distances two parties with a tone of reproach (Jdg. 11:12; 2 Sam. 16:10; Lk. 4:34; 8:28). In effect, “You have no claim on me.” At the very least, Jesus gave his mother a mild rebuke. 2

Clarifying the Time and Mission

The biggest assumption that can confuse us in this passage is wrongly assuming that when Jesus says, “My hour has not yet come,” he is talking about the time to start doing miracles. If that is what he meant, then he certainly changed his mind pretty quickly.

If this were the only occurrence of this expression, it would be puzzling. However, John records three other occasions, long into Jesus’ public ministry, where his “hour” or “time” had not yet come (John 7:6, 8; 7:30; 8:20). Then, during the week leading to his passion, we are told that his hour had come.

Jesus was not telling Mary he was not ready to start his ministry. He started his ministry a month earlier after being baptized and enduring a forty day period of fasting and temptation. He had begun gathering his disciples. Rather than saying, “I am not ready,” he was actually saying, “I am too busy. I have not yet accomplished what I came to do.”

This interaction created a dilemma for Mary. There is a crisis in the kitchen. Her son is enjoying the party with his new friends. When she asks him for help, he says in effect, “I’m busy.” She can respond in frustration and hurt like the mom whose thirty-year-old son lives in her basement but will not help around the house because he is too busy playing video games. Or, she can take him at his word and realize he is not at the wedding by invitation only, but by divine appointment. That wedding is one more step leading him to his hour. He really is busy.

Mary chose to take Jesus at his word. Over the years she had treasured in her heart certain events and prophetic pronouncements regarding her son (Luke 3:51). All bore witness to the truth of his words to her. She indeed had no claims on him; rather, he was her Lord, “the Son of the Most High” (Luke 1:32). Suddenly her perspective had shifted from a narrow focus on the wedding in Cana to the One sent from the throne of God to redeem his people. Mary told the servants, “Do whatever he tells you” (John 2:5). If the lack of wine was a crisis, then it was his crisis. The plans that mattered that day were his plans. The reputation at stake was his reputation.

Moms face crises. Sometimes they are frequent but relatively minor and short-lived. Some are more serious and prolonged. When the child leaves home, they take their mom’s heart with them. The most difficult crisis, is the crisis of the unknown.

The believing mom must strive to keep the proper perspective. Her Lord is on the throne, and it is a throne of grace. She has no leverage with him, and she needs none. In love, he poured out his precious blood for her. He is executing his plan, and his plan, though mysterious, is assuredly good.

So the Christian mom points her children to Christ with confidence and tells them, “Do whatever he tells you.” When anxious thoughts oppress and threaten to rob her of sleep, she reminds herself that the myriad of unknowns are fully known to Jesus. The crisis is his crisis. This is a Christian mother’s faith — not easy but very simple. 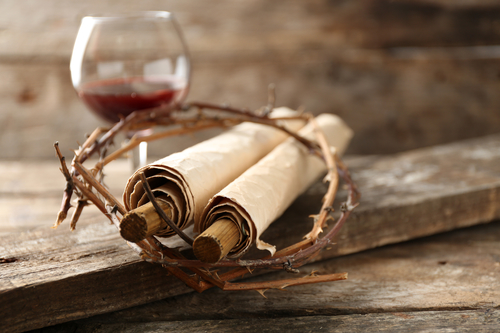 The Lamb of God and Mystery Bridegroom

Tags:FaithParentingWedding at Cana
previousThe Lamb of God and Mystery Bridegroom
nextPapas Don’t Let Your Babies Grow Up To Be Cowards